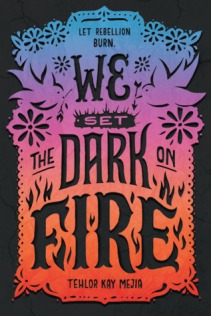 We Set the Dark on Fire is an excellent example of how government-mandated relationship structures are oppressive. The core of the story revolves around an island society’s marriage structure; because of an old myth, each man – or at least each upper-class man – has two wives. One wife, the Primera, is expected to be his intellectual equal; she runs his affairs and household and manages his social engagements – the business side of the marriage, if you will – and a second wife who is his heart. The second wife, the Segunda, is expected to be emotional, passionate, and beautiful; she bears and raises his children. The wives are expected to get along and love each other like family.

This is really only the framework for the plot, though. The plot itself revolves around the idea of who belongs in society and who doesn’t. I’ve seen some people call it illegal immigration, and there IS a wall that it is illegal to come over; the unfortunates living outside the wall are uncared for by society and government alike. But I didn’t get the impression that they weren’t actually part of the same country. So I’m not 100% certain I agree that it counts as immigration in the story, though it does have a lot of the same principles, so it may as well be. There’s a lot of othering and dehumanizing, and deciding who deserves what based on their wealth, and government checkpoints to check residence papers, so even if it isn’t technically immigration – well. It’s still a major theme.

This sounds like it could be a book on polyamory; it is not. This is government-mandated female oppression. The government, and our main character’s new husband, specifically, are intent on crushing the resistance coming from the poor who live on the edges of the island. The resistance is called La Voz, or The Voice, and they help Daniela, our main character, out of a tight spot in the beginning of the book. In return, they expect her to spy for them on her new husband, a highly-placed government official. Not knowing who to trust, and afraid of her lies being discovered, she agrees.

What follows is the early stages of rebellion: protests, government cover-ups, undercover meetings, and military checkpoints. In the middle of it all, Daniela begins to fall in love with her Segunda, Carman, who seems to have secrets of her own.

I really really enjoyed this book, and I am very much looking forward to the second! It’s listed as a duology, so it should just be the two. I can’t wait!

From the cover of We Set the Dark on Fire:

At the Medio School for Girls, distinguished young women are trained for one of two roles in their polarized society. Depending on her specialization, a graduate will one day run her husband’s household or raise his children, but both wives are promised a life of comfort and luxury, far from the frequent political uprisings of the lower class.

Daniela Vargas is the school’s top student, but her bright future depends upon no one discovering her darkest secret – that her pedigree is a lie. Her parents sacrificed everything to obtain forged identification papers so Dani could rise above her station. Now that her marriage to an important politico’s son is fast approaching, she must keep the truth hidden or be sent back to the fringes of society, where famine and poverty rule supreme.

On her graduation night, Dani seems to be in the clear, despite the surprises that unfold. But nothing prepares her for all the difficult choices she must make, especially when she is asked to spy for a resistance group desperately fighting to bring equality to Medio. Will Dani give up everything she’s strived for in pursuit of a free Medio – and a chance at a forbidden love?

The first in a sizzling fantasy duology from debut author Tehlor Kay Mejia, We Set the Dark on Fire is a boldly feminist look at freedom, family, and fighting the power.

3 thoughts on “Book Review: We Set the Dark on Fire”