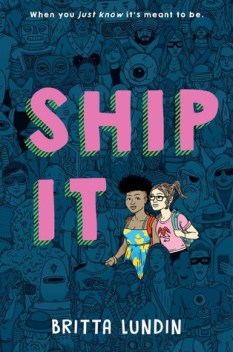 Claire’s an obsessed jerk. Let me just get that out ahead of everything else. Claire is one of two viewpoints in this book, and I won’t even call her a protagonist, because Forest, the male viewpoint character, is FAR more sympathetic. Yeah, he’s a touch homophobic at the beginning of the book, but he learns. Claire, on the other hand, has one goal that she’s obsessed with and Will. Not. Let. It. Go. Single-minded determination can be a great thing, but Claire doesn’t see or understand the harm she’s doing in pursuing her goal. The few times she does see, she doesn’t seem to care. Sure, she’s sixteen, but holy crap, girl. Maybe, when people tell you a thing can’t happen, you should stop and ask them why instead of stubbornly insisting it CAN happen if only they’ll let it.

Let me back up slightly. Claire is a superfan of a show called Demon Heart. In the show, a demon hunter and a demon-with-a-heart play off each other in what the fans see as a romantic manner. This comes as a huge surprise to at least one of the stars of the show, Forest Reed, who plays the demon hunter. Forest has a rather disastrous interaction with Claire at a Q&A (he’s an asshole about her question, which is about the two characters being gay) and the show decides, in order to salvage things, to have Claire travel with them to the next few public appearances, since she’s a big name in the fandom. Forest sees this as a job he has to put up with for a paycheck. Claire sees this as a chance to make her ship real, and goes to – well – ridiculous lengths to convince the showrunners and stars.

Ultimately, Claire is right that representation is incredibly important. And she’s probably even right that showrunners and stars should take risks with their careers to bring that representation to screen. But she’s such an asshole about it that I can’t even cheer her on. She’s even kind of a jerk to Tess, the cute fanartist she meets at the first convention (and keeps running into at the ensuing cons).

Claire aside, I actually enjoyed the book. There were a couple of twists at the end that I very much enjoyed.

One bit I did NOT enjoy was Tess identifying as pan “because bi means two.” That definition of bisexual – that it’s binary, only attracted to men and women – is biphobic and has NEVER been true. Bisexual means attracted to your own gender and others. That first definition tries to make bisexuals seem transphobic, and I’m frustrated that it persists. So it’s disappointing to see the statement made in the book go unchallenged.

There’s also an anxiety-inducing scene late in the book that I can’t say much about because it’s a major plot twist, but if you have issues with intimidating men, maayyyybe skip this one.

There is quite a bit of representation in the book, between Tess, the pansexual black girl, Claire, a questioning/queer white girl, and Forest, who is definitely questioning his sexuality, and learning about gender and sexuality representation issues from Claire. Oh, also Caty, a studio assistant, who is bisexual. (But who clarifies, unnecessarily, that she’s attracted to boys and girls.)

So I’m quite torn on this book. I liked it, but it has issues.

From the cover of Ship It:

Claire is a sixteen-year-old fangirl obsessed with the show Demon Heart. Forest is an actor on Demon Heart who dreams of bigger roles. When the two meet at a local Comic-Con panel, it’s a dream come true for Claire. Until the Q&A, that is, when Forest laughs off Claire’s assertion that his character is gay. Claire is devastated. After all, every last word of her super-popular fanfic revolves around the romance between Forest’s character and his male co-lead. She can’t believe her hero turned out to be a closed-minded jerk. Forest is mostly confused that anyone would think his character is gay. Because he’s not. Definitely not.

Unfortunately for Demon Heart, when the video of the disastrous Q&A goes viral, the producers have a PR nightmare on their hands. In order to help bolster their image within the LGBTQ+ community – as well as with their fans – they hire Claire to join the cast for the rest of the publicity tour. What ensues is a series of colorful Comic-Con clashes between the fans and the show that lead Forest to question his assumptions about sexuality and help Claire come out of her shell. But how far will Claire go to make her ship canon? To what lengths will Forest go to stop her and protect his career? And will Claire ever get the guts to make a move on Tess, the very cute, extremely cool fanartist she keeps running into? Ship It is a funny, tender, and honest look at all the feels that come with being a fan.