So last weekend we drove to Pittsburgh for Anthrocon, the second largest furry convention in the world. It was the largest until Midwest Fur Fest overtook it last year! If you’ve never heard of furries (or have only heard of them from CSI, ugh), they are a really fun subculture. Popular culture likes to call them a fetish, but mainstream furry culture is absolutely not. Furries are, simply, people who like anthropomorphic animals. Often they have fursonas, or an idea of who they would be if they were an anthropomorphic animal, and some of them have made or commissioned fursuits (similar to mascot suits) so they can dress up and pretend to be their fursona. Furry culture is a happy one, really – there is just so much joy at Anthrocon, from people dressing up and just playing. There are meetups for different types of animals, like bird suiters and cats and dragons. (I saw a photo on Twitter of a water buffalo at a lion meetup captioned “living dangerously” which cracked me up.)

One of the best things about furry culture, in my opinion, is the lack of giving a fuck about gender roles and sexuality. Most suits obscure your gender – and for gender non-conforming people, it can be an incredibly freeing experience. So there are a lot of pride flags flying, and transgender flags are incredibly common. (I saw several fursuiters wearing them like capes!) It’s just an amazing place to be yourself, because nobody judges you.

Husband in a badger mask, and boss trying on a tiger mask in the mirror.

So this is how we spent our weekend. We help a friend of ours sell leather masks and folding fans, both at this con and at the Maryland Renaissance Fair every year. (See photo above, and her website here!) It is an absolute blast, spending time with three of our best friends (boss and her partners) and chilling with furries.

Now that you know what furries are about, the rest of this post should make more sense! Thursday we drove up to Pittsburgh. We normally help set up the booth, but they only allow a certain number of people in with the Dealer, so Tiger and her partners set up her booth while we got our badges and wandered back to the hotel until dinner.

Three fursuiters in the Dealer’s Den.

Friday the Con kicked off for real, and the Dealer’s Den opened. We sold fans (SO MANY FANS) and masks until 6pm. We got to see some amazing fursuiters walk through the Dealer’s Room, and said hi to several people we knew from Fair and previous Anthrocons. I walked down to the Charity Table, because this year’s charity (Anthrocon supports a different one each year) was Pearl Parrot Rescue, so they had a few different parrots at their table throughout the weekend. We ended up raising a record $46,440 for their charity!

Saturday was another full day in the Dealer’s Den, with the Fursuit Parade in the middle of the afternoon. They actually blocked off a road outside the conference center, and put out a bunch of chairs so people from Pittsburgh could come watch the parade! Pittsburgh is an amazing city, and they’ve absolutely embraced Anthrocon and furries. The local restaurants usually have deals for people with Anthrocon badges, or furry-themed food specials, and many places do events themed around the furries. Anthrocon attendees regularly inject several MILLION dollars into the local economy over the weekend, though, so it’s no surprise they love us!

Sunday the Dealer’s Den closed at 4 instead of 6, to give the Dealers time to pack up their booths and load out. We still had 6 hours of vending time, and saw many more fursuits. I don’t remember which day we saw Scyther, but they were one of many Pokemon suiters. After packing up Tiger’s booth, we headed back to our hotel. They drove back Sunday night, but we stayed an extra night in Pittsburgh….

So we could go to the National Aviary Monday morning! BECAUSE BIRBS. The Wattled Curassow, above, liked to hang out on the railing. I was highly amused at how many people walked by her, or stood at the railing right next to her, without noticing she was there, just chilling. This was in the Wetlands environment, along with spoonbills and flamingos and pelicans and all kinds of birds.

I actually got to hold a fish to feed a Tern as part of their interactive feeding talk. I took video of the first half of the talk. I’ll try to upload that soon, because it was really neat! 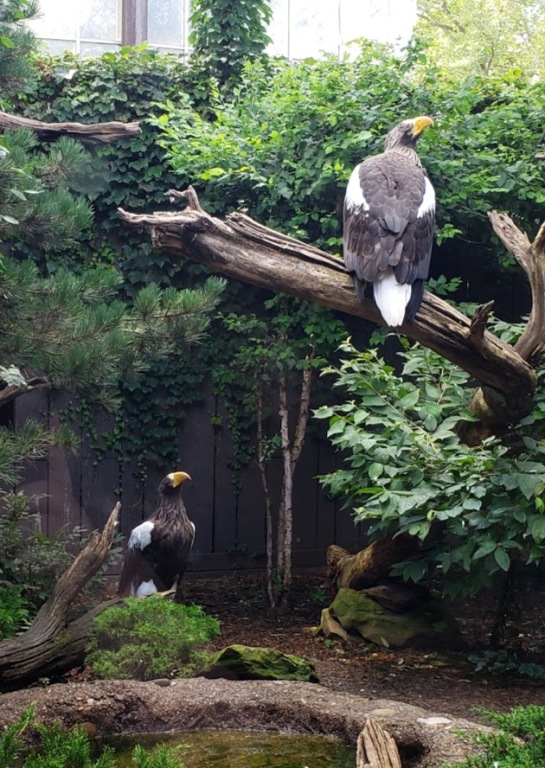 In other exhibits they had Stellar’s Sea Eagles, which were HUGE. I knew they were big, but DAAAANG. 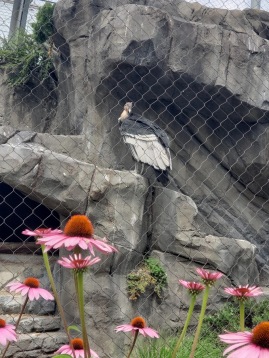 Or at least I thought they were huge until we got to the Andean Condor exhibit. I was really excited by this one, and it was a large part of why I wanted to go to the National Aviary. Andean Condors are the largest flying bird in the world, and WOW. We walked up just as one of them hopped up onto a rocky ledge and HOLY COW THEY ARE HUGE. It’s hard to get a sense of scale through pictures, but trust me. These guys are enormous.

In addition to these giants of the bird world, we also saw Tawny Frogmouths, a Kookaburra, and Flying Foxes. Which are bats. But hey. They fly!

In the Rainforest Exhibit were a pair of Hyacinth Macaws, which is one of my favorite species, and this fabulous bird in a nest, among many others. We saw a Palm Cockatoo – the amazing black ones – but he hid behind a tree very quickly, so I didn’t get a picture.

I also didn’t get a picture of the lorikeets, but we fed them! I had two come to me immediately – I’d been hanging out outside the enclosure talking to them through the wire mesh – and they didn’t want to leave when the nectar was gone. One of them I had to reach up and set on a branch, he was fairly determined to stick with me! The keepers were rather surprised he’d refused to leave, but I explained I’d grown up with birds. They seem to like me! 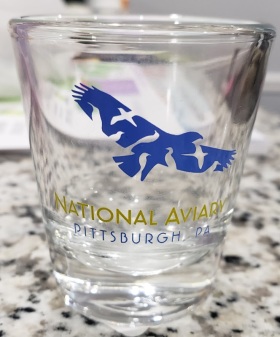 I have three souvenirs from the weekend – a shot glass from the aviary, and two AMAZING posters from Anthrocon. The expression on the parakeet’s face just KILLS me. (The artist is on Twitter at @TsaoShin) 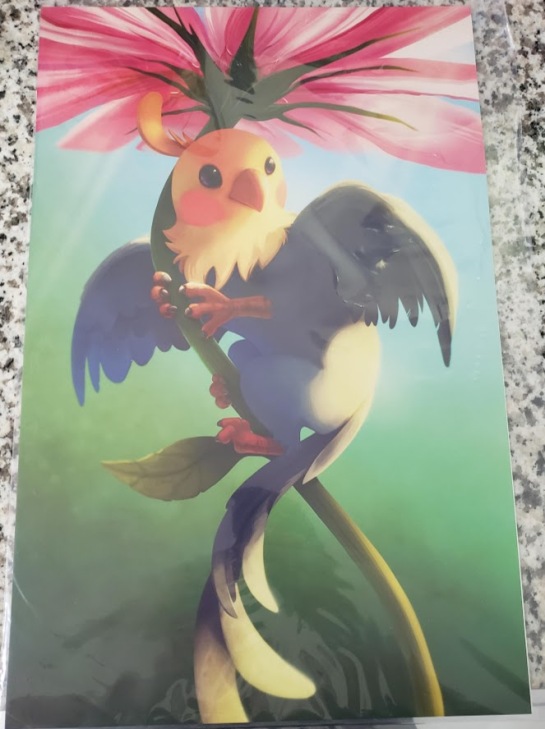 Monday afternoon we drove back from the aviary, fell into bed, and slept until Tuesday. It was a fantastic weekend. We’d originally planned to go to Toronto instead of coming home, but that fell through, and we’ll probably try to do it next year instead. I am exhausted – well, maybe not by the time this post goes up, hopefully! – but happy.

2 thoughts on “Anthrocon Wrap Up!”