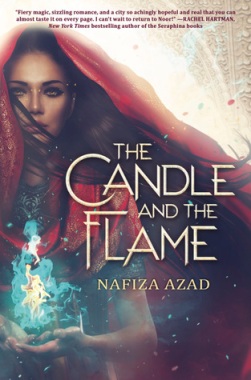 The setting of this book reminds me of Valerian and the City of a Thousand Planets. Fatima survived the slaughter of the entire population of her city, and since then it has been repopulated by people from many countries, walks of life, cultures, and languages. The city is a complete melting pot, and I wish more had been made of that fact, honestly.

I wish more had been made of a lot of things in this book. I liked it – but it wasn’t as spectacular as I’d hoped. It’s possible it’s because I read it right after We Hunt the Flame, which any book would have trouble standing up to; it’s possible it’s because I was coming down with a cold when I read it and my brain wasn’t throwing itself into the story as much as it normally does. There’s a lot of possible reasons – but I just didn’t love it. It wasn’t bad. But it wasn’t great.

I mean, it’s djinns and humans working together – that’s usually my catnip – but I just couldn’t lose myself in this story. I was annoyed at the main character a LOT. For insisting on going by two names the entire book, which were a mouthful. For agreeing to things she should have fought. For fighting against things that were in her own best interests.

The changes that the description speaks of – that change Fatima in ways she can’t fathom – effectively turns her into a different person. Something about that sat very wrong with me. Her sister recognized she was no longer the sister she knew, but she wasn’t allowed to grieve. That bothered me quite a lot. I can’t explain exactly why without spoiling plot, but the book didn’t treat it like an issue, and it definitely was.

Honestly, I’d skip this one and go read We Hunt The Flame or Rebel of the Sands instead.

From the cover of The Candle and The Flame:

A GIRL WITH THE FIRE OF A DJINNI. A CITY SCARRED BY VIOLENCE.

Fatima lives in the city of Noor, a thriving stop along the Silk Road. There the music of myriad languages fills the air, and people of all faiths thread their lives together. However, the city bears scars of its recent past, when the chaotic tribe of Shayateen Djinn slaughtered its entire population – except for Fatima and two other humans. Now rules by a new maharajah, Noor is protected from the Shayateen by the Ifrit, Djinn of order and reason, and by their commander, Zulfikar.

But when one of the most potent of the Ifrit dies, trouble brews and Fatima is changed in ways she cannot fathom, ways that scare even those who love her. Oud in hand, Fatima is drawn into the intrigues of the maharajah and his sister, the affairs of Zulfikar and the Djinn, and the dangers of a magical battlefield.

Nafiza Azad weaves an immersive tale of extraordinary magic and the importance of names; fiercely independent women; enticing food; and, perhaps most importantly, the work for harmony within a city of a thousand religions, cultures, languages, and cadences.