This was my pick for the “song lyrics in the title” prompt for the PopSugar 2018 Reading Challenge. I feel a little like “Unbelievable” is a bit of a cop-out for the prompt, but it was already on my to be read list, and it works. And the book is fantastic.

This is the story of Katy Tur’s time on the campaign trail as one of the journalists covering Donald Trump’s campaign. It is, as she says, unbelievable. When it begins, she thinks it will be very short – as most of the American public thought. No one thought Trump would wind up being the Republican nominee. But as she attends rallies, and watches the vitriol of his supporters – which occasionally gets turned on her, as a member of the “lying, fake media,” she begins to realize he could, in fact, win this thing.

We experience Tur’s shock as he calls her out by name multiple times, leading to death threats by Trump supporters, and security being assigned to her specifically. Through all of this, Tur continues to do her job as a journalist, reporting on the travel, the rallies, the information from sources within the campaign as they criss-cross the country and promise ridiculous things.

I was worried at first that the book would be a dry rehash of the events, but it is far from it. Tur speaks with a refreshing, absorbing voice. Even knowing the outcome – that Trump is elected president – it’s a page-turner that didn’t let me go until the last page. Unbelievable is a fast-paced, fascinating book by a first-class journalist.

From the cover of Unbelievable:

Katy Tur lived out of a suitcase for a year and a half, following Trump around the country, powered by packets of peanut butter and kept clean with dry shampoo. She visited forty states with the candidate, made more than 3,800 live television reports, and tried to endure a gazillion loops of Elton John’s “Tiny Dancer”—a Trump rally playlist staple.

From day 1 to day 500, Tur documented Trump’s inconsistencies, fact-checked his falsities, and called him out on his lies. In return, Trump repeatedly singled Tur out. He tried to charm her, intimidate her, and shame her. At one point, he got a crowd so riled up against Tur, Secret Service agents had to walk her to her car.

None of it worked. Facts are stubborn. So was Tur. She was part of the first women-led politics team in the history of network news. The Boys on the Bus became the Girls on the Plane. But the circus remained. Through all the long nights, wild scoops, naked chauvinism, dodgy staffers, and fevered debates, no one had a better view than Tur.

Unbelievable is her darkly comic, fascinatingly bizarre, and often scary story of how America sent a former reality show host to the White House. It’s also the story of what it was like for Tur to be there as it happened, inside a no-rules world where reporters were spat on, demeaned, and discredited. Tur was a foreign correspondent who came home to her most foreign story of all. Unbelievable is a must-read for anyone who still wakes up and wonders, Is this real life? 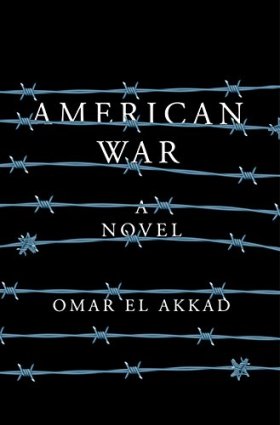 By now you probably know there are a few things I tend to enjoy in novels. Dystopias, Fantasies, Debut Novels, and Diversity tend to peak my interest, and American War is a dystopian debut novel by an Egyptian-Canadian author.

El Akkad did an absolutely amazing job of weaving together the North/South rivalry of the US, climate change, the changing nature of energy generation, and US wars in the middle east to write an all-too-plausible novel about the US, seventy years from now.

I’d like to think this book would make people look at refugees and terrorists in a new light – with more understanding and compassion and maybe with ideas to help actually combat the attitudes and circumstances that lead to terrorist acts. But I doubt it. I doubt this will change any minds that don’t already understand the underlying reasons.

My only quibble with this book is while he manages to weave together so many other issues facing our country right now, he doesn’t really wrap in racism. And I have a hard time believing our country is past racism 70 years from now.

I was very pleasantly surprised to find the protagonist is a bisexual, gender non-conforming woman of color. How awesome is that? And her bisexuality isn’t mentioned, it’s shown, her one on-screen sex scene (and it’s only barely on-screen) being with a woman. (She’s also attracted to a man in the book.)

The author was born in Egypt, grew up in Qatar, and lived in Canada, earning at least one award for his investigative reporting while working at The Globe and Mail. He’s one of the Canadian Broadcasting Company’s 17 writers to watch this year, and I see why. American War is definitely one of my favorite books of 2017.

My other Read Canadian reviews:
1. An Astronaut’s Guide to Life on Earth
2. The Red Winter Trilogy
3. Station Eleven
4. The Courier
5. The Last Neanderthal
6. this book
7. Next Year, For Sure
8. That Inevitable Victorian Thing
9. All The Rage
10. The Clothesline Swing
11. Saints and Misfits
12. Tomboy Survival Guide
13. The Wolves of Winter

From the cover of American War:

In this fiercely audacious debut novel, Omar El Akkad takes us into a near future in which a politically polarized America descends into a second Civil War – and amid warfare, a family fights to survive.

Sarat Chestnut, born in Louisiana, is only six when the war breaks out in 2074. But even she knows that oil is outlawed, her home state is half underwater, and the unmanned drones that fill the sky are not there to protect her. A stubborn, undaunted, and thick-skinned tomboy, she is soon pulled into the heart of secessionist country when the war reaches Louisiana and her family is forced into Camp Patience, a sprawling tent city for refugees. There she is befriended by a mysterious man who opens her eyes to the injustices around her and under whose tutelage she is transformed into a deadly instrument of revenge.

Narrated by the one person privy to Sarat’s secret life, American War is a hauntingly told story of the immeasurable ruin of war – in a nation, a community, a family, an individual. It’s a novel that considers what might happen if the United States were to turn its most devastating policies and weapons upon itself.