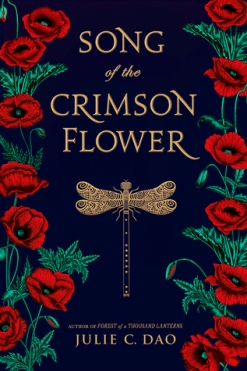 This is a companion book to Julie Dao’s duology, after Forest of a Thousand Lanterns and Kingdom of the Blazing Phoenix. I really enjoyed the three books as a whole; the stories in each book were connected but standalones at the same time. In Forest of a Thousand Lanterns we had the rise of the evil queen from Snow White (but Asian) and Kingdom of the Blazing Phoenix was Snow White (but Asian). Kingdom could stand alone fine, but knowing the back story of Xifeng made the ending that much more heartbreaking. Similarly, Song of the Crimson Flower could also stand alone just fine, but knowing the background of Commander Wei made his small part in the story much more worthwhile, and lent more weight to the cameo by Empress Jade.

But Song of the Crimson Flower isn’t about Empress Jade, or Commander Wei. Song is about Lan, a nobleman’s daughter of no real import, and Bao, the poor orphan boy who loves her. Bao reveals an elaborate deception to Lan, and in her heartbreak, she is cruel to him and sends him away. He flees their village and happens across the river witch, who thinks he came to her for some malicious purpose, curses him, and sends him back to where he came from. Which happens to be Lan, who is already regretting her actions towards him. Lan agrees to help break his curse, and we’re off on the adventure.

The book is actually quite short – under 300 pages – and a LOT happens. Dao has a rare talent for description and action, together in a succinct way that makes it a lush tale that doesn’t FEEL like it’s hurried along, but is still over before you know it. (For an example of her beautiful prose, see my last Friday 56!) This is a lovely addition to Forest and Kingdom, and I’m curious if Dao plans to write more in this world or not.

From the cover of Song of the Crimson Flower:

WILL LOVE BREAK THE SPELL?

After cruelly rejecting Bao, the poor physician’s assistant who loves, her, Lan, a wealthy nobleman’s daughter, regrets her actions. So when she finds Bao’s prized flute floating in his boat near her house, she takes it into her care, not knowing that his soul has been trapped inside it by an evil witch, who cursed Bao, telling him that only love will set him free. Though Bao now despises her, Lan vows to make amends and help break the spell.

Together, the two travel across the continent, finding themselves in the presence of greatness in the forms of the Great Forest’s Empress Jade and Commander Wei. They journey with Wei, getting tangled in the webs of war, blood magic, and romance along the way. Will Lan and Bao begin to break the spell that’s been placed upon them? Or will they be doomed to live out their lives with black magic running through their veins?

In this fantastical tale of darkness and love, some magical bonds are stronger than blood.

One thought on “Book Review: Song of the Crimson Flower”